Although the dumping of old tires in an empty lot on Hamblin Avenue and on parcels of land and a vacant lot on Parish Street was not a collective effort the removal of those tires on June 2 will have to be, says Sarah Kelly, Solid Waste and Recycling Coordinator for Calhoun County.

“A lot of times when someone starts dumping stuff other people will join in,” Kelly says. “Even if the owner of that property put some stuff there, other people may also have put stuff there.”

In this case that “stuff” was tires that can be disposed of for a charge of up to $5 a piece, the state’s preferred way for people to get rid of tires, Kelly says.

“It’s not mandatory when you go to a tire place to get new tires that you have to leave the tires there. If you do leave them there’s a tire disposal fee of $5 per tire,” she says. “They already are set up to have companies come and pick up tires and take them to a tire processor that does things with tires to make their disposal legal. They grind up and chop up the tires to go to a landfill. If you try to landfill a whole tire, it will float and rise and eventually pop out of the ground.”

The tires from the local cleanup will go to tire processors for handling so that they are safe to go into a landfill. Kelly says chipped-up tires also can be burned to generate power or used to make products that include rubber matting for playgrounds, guardrails, or special mats used in driveway gutters in California. 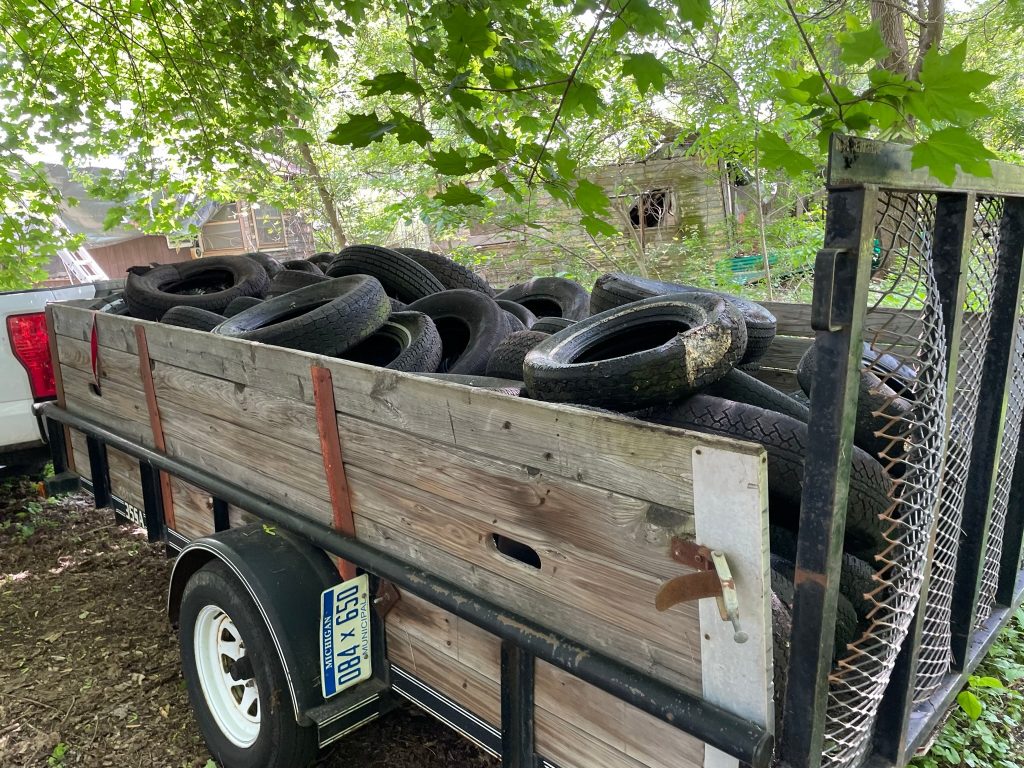 A few years ago, the county dealt with a foreclosed home that was literally filled with tires all the way down to the basement, says Melinda Weaver, Calhoun County’s Chief Deputy Treasurer.

“Every inch of it had tires,” she says. “It happens more than you think especially with it costing people to get old tires taken care of it. If people find a dumping spot, they’re going to do it. It’s getting ridiculous because people are not willing to pay the price to dispose of them, especially now when $5 could be a loaf of bread or a gallon of milk for somebody.” 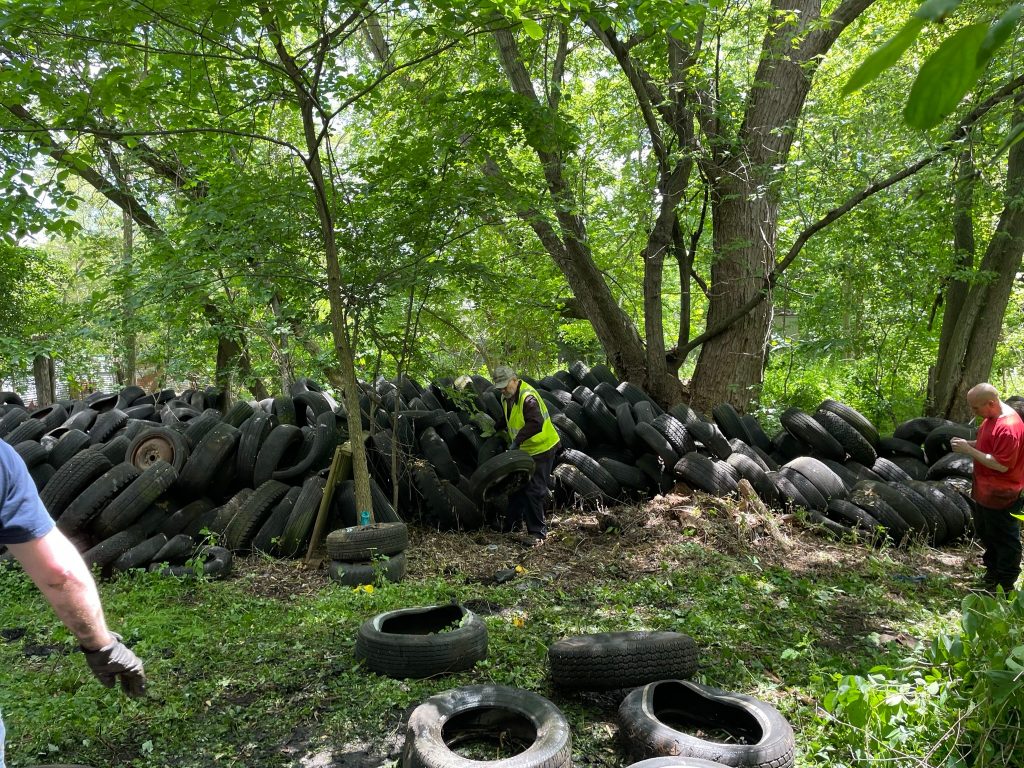 The clean-up of more than 1,000 tires on the less-than one-acre property between 12th Street and Butler Street plus two additional parcels and a vacant lot on Parish Street, which together have more than 200 tires, will involve Kelly’s department, the Calhoun County Sheriff’s Department that will have a work crew from K-PEP, the Michigan Department of Environment, Great Lakes and Energy (EGLE), the Calhoun County Land Bank Authority and a contract worker who will be paid through the county Treasurer’s Office.

The city invests a lot of time and effort to make sure neighborhoods are attractive so that people want to live in them, says Ted Dearing, Battle Creek Assistant City Manager.

“We try to have neighborhoods as destinations of choice and one of the best ways to do that is these types of cleanup efforts,” he says.

Kelly says EGLE began discussing the cleanup of the Hamblin Avenue property with her about five years ago. The County Treasurer’s Office took ownership of that property on April 1 after the owner did not pay taxes on it from 2019 to 2021, Weaver says.

The Land Bank owned the three parcels at 285 and 297 Parish as well as a vacant parcel that was purchased from the City of Battle Creek adjacent to 297 Parish. All of these sites have subsequently sold with the condition that the tire cleanup be done, says Krista Trout-Edwards, Executive Director of the Land Bank.

“Neither site is considered vacant, both have owners currently working on them and have been sold through the Land Bank’s Transform This Home program. That means the new buyers will rehabilitate the existing homes as living units and bring them back into compliance with housing codes,” Trout-Edwards says. “The Land Bank received the residential properties by default at the end of the foreclosure process in 2020 from the Calhoun County Treasurer after they failed to sell at the tax foreclosure auctions. It acquired the vacant parcel from the city and added it to 297 Parish to increase the size of the yard.”

Partnering with the Solid Waste and Recycling Department, she says, “is a huge benefit because it allows us to safely clean up the area and ensure the tires are properly removed. We’ve also worked with our other contractors to collect tires from other Land Bank owned sites in the Washington Heights Neighborhood so that this cleanup will impact the broader area.”

Dearing says, “One of the unfortunate by-products of being a larger geographic area is that it’s hard to identify every vacant lot where people dump before being caught. People identify a site and take advantage of it not being monitored before we can take action.”

A $4,000 grant from EGLE will cover the cost of two trailers and the tire removal on Hamblin and Parish, Kelly says.

Trout-Edwards says this grant, “allows us to safely remove the tires at a significant cost savings to everyone and is a great coordinated effort between county departments. It also creates a safer environment for the adjacent property owners.”

Kelly says she knows from talking to the city’s Animal Control staff that feral cats have been living on the Hamblin Street property.

“They kill birds and if they’re unvaccinated, they can cause disease. They’re also bringing in other critters that are causing problems for neighbors near that property,” she says. “The abandoned tires also are an ideal habitat for breeding mosquitoes because of the water that gets in them from sitting in a yard. 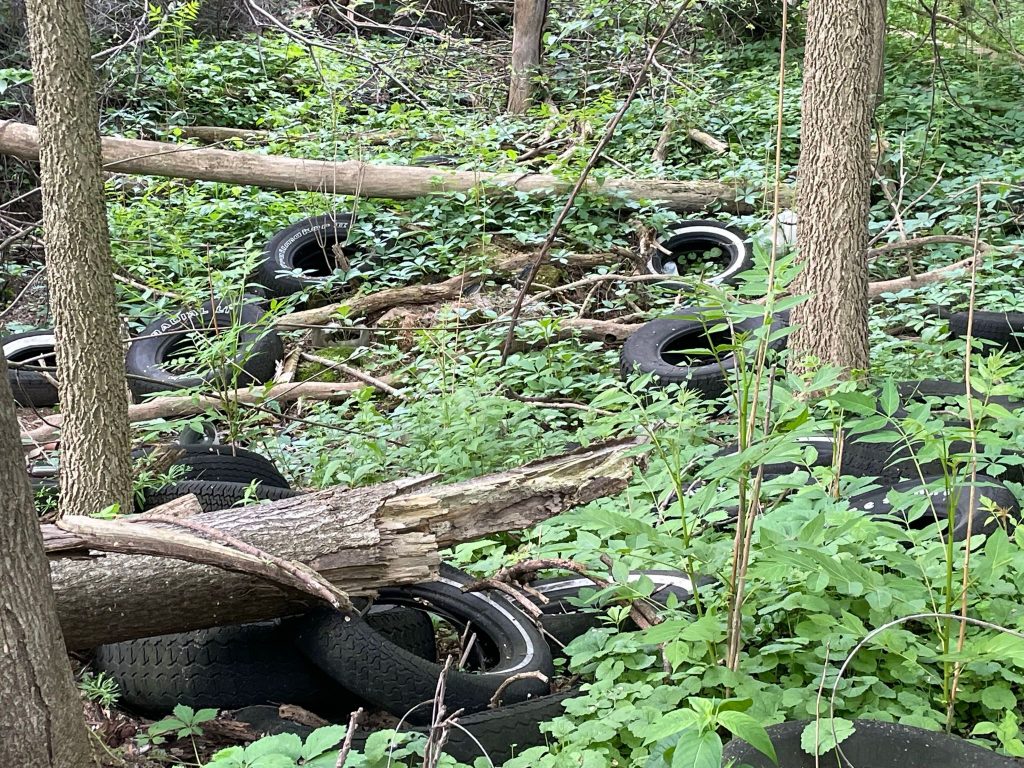 “Having large volumes of tires like that is an environmental and human health risk. It’s a really bad spot because of the condition it’s in. It is a mess. We’re making it better, but it needs a lot of cleaning up before we can even try to sell it.”

Weaver says the minimum bid for the property will be about $4,576. She is not holding out much hope that the county will recoup the money it has spent to deal with the property.

“The taxes were $976.19 to prevent foreclosure and that’s for all three years it wasn’t paid. When it forfeits all kinds of fees are added on because we have to do title searches and all of these mailings,” Weaver says. “It will cost us more than $4,576. This could have been avoided if the owner had paid the taxes. We’ll sell it for back taxes and the money we’ve put into it. More than likely it will get deeded over to the Land Bank and we won’t recoup that money. This happens all of the time. These companies and people walk away and we’re left to clean it up.”