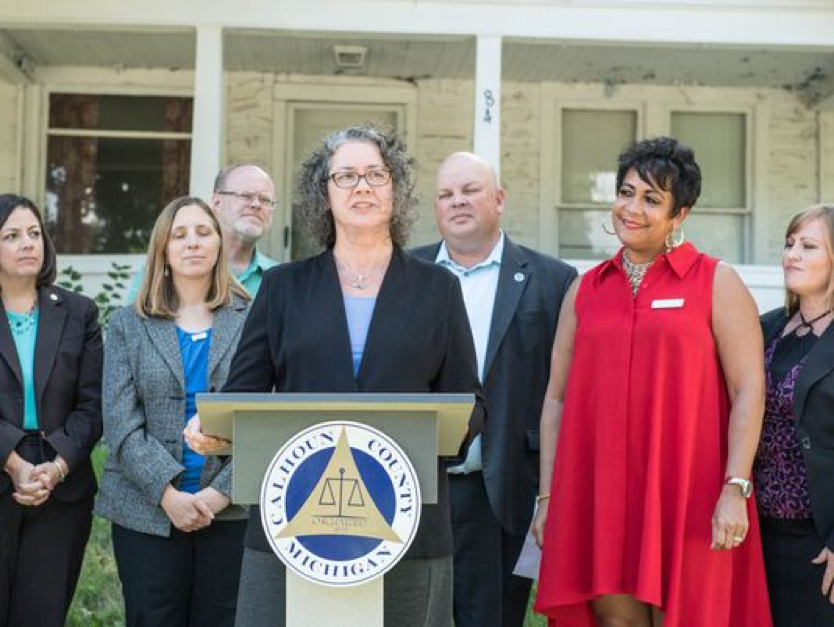 Calhoun County Treasurer and land bank board Chair Christine Schauer addresses the news media Thursday at 84 Riverview Ave. in Battle Creek. The land bank received $3.8 million in MHSDA funding to demolish blighted properties, including the one on Riverview.
(Photo: Al Lassen/For the Enquirer)

The Calhoun County Land Bank Authority will continue to flight blight in the county by tearing down several vacant properties with grant funding awarded by the state.

On Thursday, the land bank said it received $3.8 million from the Michigan Homeowner Assistance Nonprofit Housing Corp. and the Michigan State Housing Development Authority to demolish blighted homes in Battle Creek, Albion, Emmett Township, Bedford Township and Homer. Among the homes is 84 Riverview Ave., a vacant house heavily damaged by a 2013 fire, and where Thursday’s announcement was held.

Demolitions are expected to get underway early next year.

Battle Creek resident Rick McNally, who lives next to the home on Riverview with his wife, Katherine, said he vividly remembers the fire at the property on Easter weekend in 2013. McNally said he’s had concerns about the home since the incident, given the damage it sustained, and he “can’t wait” for it to come down.

“It’s been three-and-a-half years since it burned partially and, for our family, it means a lot,” he said. “Because the property values in the neighborhood, it’s a huge blight. It’s kind of embarrassing to have people over and there’s a burned-down house next to you. It means a lot. We’re ecstatic.”

This blighted home at 84 Riverview Ave. will be demolished by the Calhoun County Land Bank Authority. (Photo: Al Lassen/For the Enquirer)

The state awarded $11 million in total to several land banks in Michigan primarily for the purpose of demolishing vacant and blighted properties. Other homes deemed high-priority by the land bank include 70 Saratoga Ave. in Bedford, 153 O’Neil St. in Emmett, 220 Plain St. in Homer and 310 Fitch St. in Albion.

Calhoun County Treasurer and land bank board Chair Christine Schauer said being awarded nearly $4 million shows confidence in the work being completed by the land bank. Schauer said the land bank has been working incrementally for several years to secure grants to rid neighborhoods of blight and revitalize areas bogged down with derelict properties.

“It will allow us to address almost every blighted house that is currently in public ownership,” she said. “The grant also allows us to do active acquisition from private owners under certain circumstances at blighted properties. This is just a windfall for this county.”

The land bank has been active this year in its efforts to demolish blighted properties. In March, the land bank and the city of Battle Creek were awarded $225,000 in grant funding by the Michigan Land Bank Fast Track Authority to demolish eight homes in Battle Creek and 13 in Albion. Last month, the land bank said it received another $125,000 to demolish another 10 buildings in Albion, most of which rest along the city’s corridors near the downtown and surrounding neighborhoods.

Battle Creek resident Rick McNally lives next to the blighted property at 84 Riverview Ave. McNally said he remembers the fire that tore through the home in 2013 and he “can’t wait” for it to be demolished by the Calhoun County Land Bank Authority. (Photo: Al Lassen/For the Enquirer)

“I’m proud to say I serve on the land bank board, which has done great things in our community,” Derek King, chairman of the Calhoun County Board of Commissioners, said during his prepared remarks Thursday. “Through the partnerships with municipalities to address blight in creative ways, the magnitude of this grant might not have been the same without the collaboration with what they’ve done with other communities.”