A longtime vacant downtown property soon could be a centerpiece of the downtown Battle Creek experience. 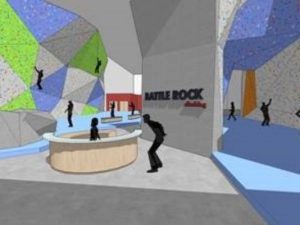 The sale price of the property was not immediately disclosed.

“We started Cereal City Athletics to bring more fun activities to our town,” Emily Bandeen was quoted as saying Thursday. “We loved the idea of building a climbing gym, but thought it’d be a few years before we could make that happen. Our agreement with the land bank and the city of Battle Creek will allow us to get a jump start on that project, and we’re excited to be a part of Battle Creek’s downtown revitalization.

“Battle Rock is going to be a fun, exciting gym for local families to engage the youth of our city. We also hope to be a destination for avid climbers and even host climbing competitions that will bring tourists to our town.”

The building at 50 W. Michigan has been vacant for at least eight years after the departure of Cereal City Office Supply. It may be best remembered as a former JCPenney retail store, which occupied the space in the 1970s ranging to the 1980s. Battle Creek Unlimited has owned the property since 2008 and transferred it to the land bank as a part of a 2010 agreement that allowed BCU to market the property while keeping it off the tax rolls.

The land bank said it worked with the city to complete the deal, which reportedly includes “a number of accountability measures, benchmarks, and timetables to ensure that the project stays on track.”

It is expected to be along the same lines at the land bank’s property deal with local developers David Sciacca and Alexa Smolinski of 180Urban, who purchased three downtown buildings from the land bank in March. 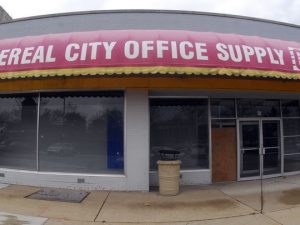 “This facility will be a huge attraction for families with children who are looking for opportunities to be active year-round, and it will draw in people from all over Southwest Michigan,” Downtown Development Director John Hart said in a release. “The facility’s fun, energetic atmosphere will bring more people into downtown Battle Creek businesses and restaurants, and the City of Battle Creek is eager to see this project take off.

“Battle Rock fits perfectly with the City’s vision to develop more housing units downtown and our efforts to make Battle Creek a regional attraction and a great place to live, work, and play.”