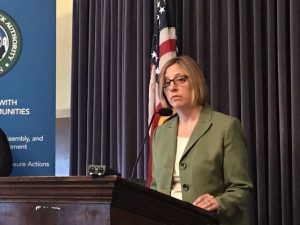 A study says the Calhoun County Land Bank has put more than $11.4 million back into the community since 2011.

“This study found that there are three impacts of the land banks: that we create safer and healthier neighborhoods, that we pump money into the neighborhoods we are working in and that we also create jobs and we help families by improving property values, but we also offer opportunities through the programs we run,” said Krista Trout-Edwards, director of the Calhoun County Land Bank and the association’s vice chairwoman.

Since 2011, the Calhoun County Land Bank has rehabbed or demolished about 650 homes. The rehab of those properties created 87 construction jobs leading to

more than $6.3 million in wages and an overall economic impact of more than $11.4 million, according to the study.

The land bank owns properties that are post-industrial, commercial, residential and also has vacant land.

Earlier this year, the county allotted $600,000 to the land bank to cover the cost of blight removal projects.

The funds will be used this year to demolish 13 tax-foreclosed houses in Battle Creek and seven in other parts of the county, along with three commercial properties: the former Bedford Mill at 22220 Bedford Road in Bedford, which was largely destroyed by fire in 2014; the former State Farm building at 410 East Drive in Marshall; and an auto body repair shop at 319 Hamblin Ave. in Battle Creek.

Since 2011, the land bank has intervened on 888 properties including residential homes, commercial property and vacant land in Calhoun County.

The study found interventions of 642 residential homessince led to an estimated $73.42 million impact on property values.

Most of the demolitions and rehabilitations primarily were done in Battle Creek.

The Michigan Association of Land Banks is comprised of the state’s 42 land banks. Its goal is to advocate for the land banks and make sure policies are in place to support them.

The association focused on Benzie, Kalamazoo and Calhoun counties for the economic impact study because the three are actively involved in the association and they represent a diverse mix of the members of the association.

In Kalamazoo County, there’s been 276 residential demolitions and 102 residential rehabilitations since 2009. The jobs have created an estimated 216 go 270 jobs that led to an economic impact of more than $35.4 million, according to the study.

Since 2012, Benzie County has completed four residential demolitions and two rehabilitations that created about two full-time jobs and led to an economic impact of $309,815, according to the study.

“I think telling your story and your economic impact can always help you acquire more funding, more projects. We want developers who are interested in our properties to come forward, we want people who have property and just need development to come forward,” director of the Michigan Land Bank Josh Burgett said. “We are a unique economic development tool in a tool box and we just want to be utilized more.”

Burgett said the goal is to focus on the needs of each community when it comes to finding out what to do with a property. In 2017, the Michigan Land Bank returned 116 properties to productive use

“We look at anything,” he said. “We have big industrial parks going up, we have single-family housing, multi-family housing. We are looking at solar energy and bright fields as opportunities for next use and other renewable energy resources. We have the property and the flexibility to be able to develop it. We just look for developers to be able to meet with local communities to create a need an fill that need.”