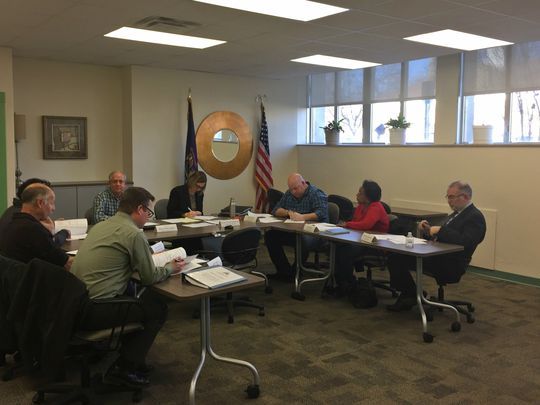 On Friday, the Calhoun County Land Bank Authority board unanimously approved transferring development agreements for the 180Urban Development and Management properties in downtown Battle Creek to Battle Creek Unlimited. BCU will oversee the completion of redevelopment projects at 15 Carlyle St., 64 W. Michigan Ave. and 119-121 W. Michigan Ave. The buildings were granted to 180Urban by the land bank in a deal that went into effect last year.

With the move, BCU, which already had a financial stake in the project, will manage the agreements while developers David Sciacca and Alexa Smolinski attempt to return the vacant properties to functional use.

Krista Trout-Edwards, executive director of the land bank, told her board Friday that the decision “helps to streamline the management of the agreement by putting the funder (BCU) in an administrative role on the agreement.”

“What became clear to us is that BCU, a party that had encouraged the land bank to enter into an agreement with the developer in the first place, was taking a more active role in the project,” Trout-Edwards said. “Given BCU’s support to the developer and our joint desire to see these projects be successful, I approached BCU with the idea of assigning the development agreement to BCU.

“Under that assignment, BCU would assume all of the rights and obligations of the land bank under the agreement.”

During a contentious December meeting, Trout-Edwards said 180Urban was in danger of losing at least two of the properties — 64 and 119-121 W. Michigan — because it was not in compliance with several agreed-upon benchmarks. Because 180Urban also was behind on securing funding for the properties, she proposed a solution that would grant an extension to the development firm to complete 15 Carlyle but would revert the other two properties back to the land bank.

Sciacca, who was in attendance during December’s meeting, disputed the land bank’s claims. He did not attend Friday’s meeting.

Battle Creek Downtown Development Director John Hart, a land bank board member, said BCU’s extended role in the program has advantages such as its access to the Direct Investment Fund and its relationship with the Michigan Economic Development Corp.

Hart said the deal essentially stabilizes a process that was at risk of “falling apart.”

“Everyone was a little nervous about would the project go forward, and if it doesn’t go forward, the land bank was concerned that they’d be left with three buildings with nothing going on,” Hart said. “That’s in direct conflict with the agreement. As soon as Battle Creek Unlimited took a little stronger of a role and additionally filled an existing gap, well, that gave us a little more security.

“If they’re going to play that role, why would we ever want to get in the way of that?”

In 2010, BCU transferred the parcels to the land bank in a deal that essentially kept the property off the tax rolls, as land banks have tax-exempt status, while giving it the option to reacquire any of them and first-refusal rights for sales.

The land bank announced the sale of the properties to 180Urban in November 2015. All three properties were sold for $1 in an agreement laced with incentives to allow 180Urban to tackle the costs of redeveloping all three buildings. Since taking them over, Sciacca has overseen aspects of the development agreement in an effort to transform the obsolete structures to accommodate residential housing and commercial businesses.

BCU now will renegotiate the development agreement with an updated timeline and requirements for 180Urban. It also must decide if it will continue to keep the reverter clause within the agreement, an aspect that was put into the agreement by the land bank to protect its assets.

BCU President and CEO Joe Sobieralski said the organization wants to do everything in its power “to get a project like this done or projects like this done to make Battle Creek a better place.”

“BCU has never fully left downtown because we manage the direct-investment fund,” Sobieralski said. “A lot of these projects like Heritage Tower, 180Urban, they end up in our court for that reason. Having the land bank grant us these development agreements allows us to push this forward and do everything in our power to make things happen downtown such as 180Urban.

“As a community, we should do everything in our power to get out of the way and make things happen.”